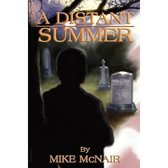 Mike McNair introduces this coming of age story, A Distant Summer, with the memories of Mike Long, a physics professor, who has returned to his home town to attend The Commander’s funeral.

“He looked about.  At least some things in the little southern Indiana town that straddled the Gibson-Vanderburgh county line had stayed the same.  Oak was narrow, like most Potter streets, in sharp contrast to the familiar Madison, Wisconsin multilane thoroughfares.”

Players in this memory included Jim, the owner of Squall Baby, a barn pigeon, Mike’s grandfather, Heidi, Mike’s secret love interest (as far back as first grade) and various other relatives and townspeople, both good and bad.

As the story unfolds, Mike visits some of his old haunts that bring back memories of his fifth grade year and the following summer.  During this time frame, Jim and Mike accept a new member of the secret agents, come up with a few new types of “secret missions” involving Squall Baby, save a mother and son from an abusive husband and the boys are kidnapped.  The story of these and other escapades are the core of the adventures the three boys and the pigeon go through.

You must read this book to fill in the missing pieces and find out what happens.  It will surprise, sadden and delight you.

The author is a retired English teacher and counselor who now spends his time writing.  He writes a biweekly humor column for the Midwest News, an online newspaper that serves southwest Wisconsin and northwest Iowa.  He also writes an e-publication called the Hooticat Newsletter that he sends out to annoy relatives.  He has two grown children and lives in Richland Center, Wisconsin with his wife, Nancy.